We had a marvelous pre-Valentine’s Day February 13 at The Melting Point.  The theme was “Duets.”  Two storytellers took the stage at once!  Couples, best friends, nemeses, and other strange and wondrous combinations.  Certain truths came to light as we witnessed two waltz, juggle, and grapple their way through a story together. 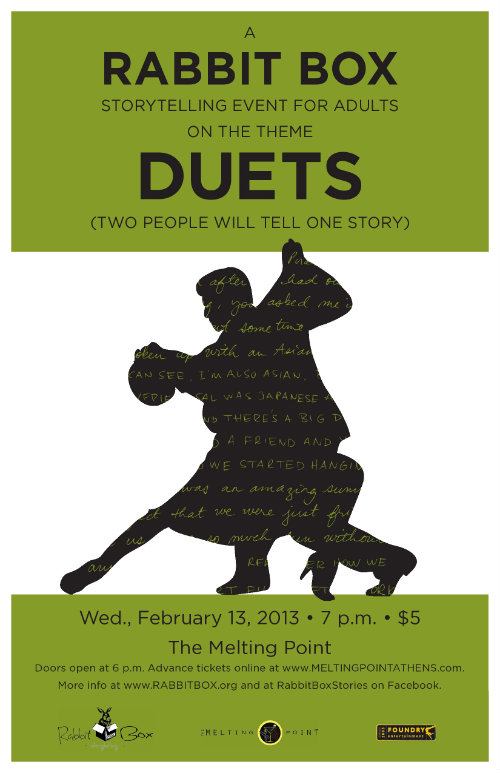 Emcee duo Kate Morrissey and Roger Stahl are decade-long Athenians from the plains of the Midwest. Kate is a mind-body therapist, yoga teacher, musician, and general soother of souls. Roger is a university prof who mostly follows Kate around.

*Andie Bisceglia* and *Wick Prichard* met telling stories to students at Ferry Beach Ecology School in Maine, where the mission was to engage students through ecological narratives. These ‘narratives’ included performing skits on themes such as soil formation. Imagine Andie with a lab jacket, wig, glasses, and a thick German accent playing Doc Rock. Imagine Wick with a thick accent, gnarly goblin hand, fake eye, and a thick accent of some origin playing faithful sidekick Igor. Throw in some nighttime get-to-bed stories for the overnight students, and you have a kid-friendly storytelling dynamic duo. Andie continues to tell ecological tales at the State Botanical Garden while Wick can’t figure out heads or tails about getting adults to plan ecologically.

*Linda Watts* was born in the Midwest, grew up in Southern California, and moved to the South when she married a sailor from Tennessee. She is retired from a career in the brokerage industry. Linda and her husband Larry currently reside in South Carolina, where her hobbies include quilting, sewing, and box wine. She wants grandchildren. *Amy Watts* is her mother’s daughter in some ways but not in others. After growing up in Tennessee, she now lives in Athens and works as a librarian with the University of Georgia. Her hobbies include tweeting, quilting, cursing creatively, and cocktails. She has cats.

*Doug Job* spent much of his childhood riding a heavily accessorized Sears single-speed coaster-brake bicycle around Bartholomew County, Indiana. But, sadly, he forgot his bike after he got his driver’s license. *Angela Pfile* rode a Schwinn with a front basket in Indianapolis, mostly to the library, as she was and remains a voracious reader. With the help of friends and our excellent local bike shops, Doug began to recover from motor vehicle addiction and embraced cycling again eight years ago. His happiest accomplishment as a cyclist is cajoling Angela to start riding again as well. They currently log over 1000 miles a year together on their vintage Cannondale tandem, including the occasional bike commute to Evergreen Christian Church, “a faith space for earthy people,” the green congregation they’re helping to start.

*Marcía Snyder* and *Katherine Edmonds* are two whimsical spirits who met on a cold North Georgia day. They were brought together by an adorable and mischievous three-colored dog. When they are not busy staring into each other’s eyes, Marcía is a shrimpologist who studies bees, and Katherine saves the rivers of America from treachery and trouble. Among their achievements, Marcía has swum two underwater laps of the Legion pool without taking a breath, Katherine makes tofu almost as good as the Grit’s, and they have been voted cutest lesbian couple in Athens by a person who only knows one lesbian couple.

*Beth Kozinsky* and *Laurie Norris* are two very upright and respectable members of the Athens “Townie” community. When not found laughing themselves sick at their own jokes, they haunt the halls of UGA’s English Department as teachers and students and loiterers. This is their first time performing in front of a live studio audience. *Jenifer Strickland* is a recent UGA grad caught in that awkward time between school and a career. Between work and the occasional need to sleep for an hour or two, Jenifer has no time to call herself a writer, but she has something to say with the help of her good friend Katelyn. Katelyn Binder is an English major enjoying her super senior year and indulging her enthusiasm for language at UGA. Katelyn loves laughing and telling stories, so she’s hoping to get a little of both in tonight.

*Nancy and Charlie Hartness* met in 1996 at a fiddle festival in Washington state. They got married in 2006 on her father’s birthday and moved from Portland, Oregon to Athens later that year. They are musicians and writers. Their musical duo was originally called Little Fice Dog, but no one knew what that meant. Now they play together as
Hawk Proof Rooster.

One Reply to “RB 9 Audiocast: Duets”

We are taking stories from people at home! To submit a story online

Do you have a story of Nesting? Of creating a home or having to adjust as families grow and change? Rabbit Box is looking for stories about home and family for our next event April 8th.