Elders in the Athens community were the stars of Rabbit Box’s May show called Trying Times and Triumphs, Too, a collaboration with the Athens Community Council on Aging (ACCA). May is nationally recognized as Older Americans Month in the United States. Emcee Dr. Leara Rhodes, who has practiced and now teaches journalism, dug up some interesting facts for the show. Because storytellers hailed from various places — Jamaica, Argentina, India, and Japan — she shared how elders are honored in each of these countries to set the tone as each person took the stage.

END_OF_DOCUMENT_TOKEN_TO_BE_REPLACED 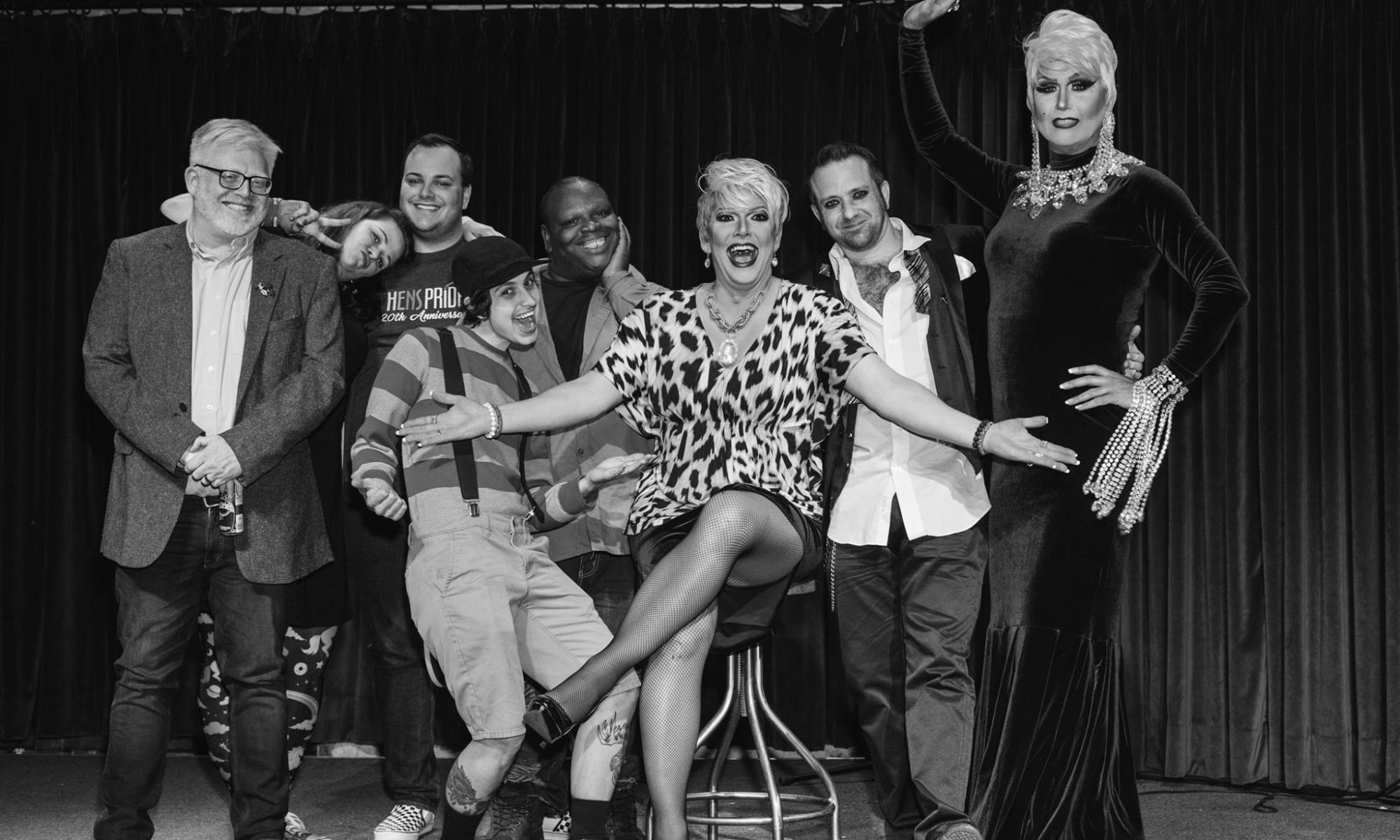 The themes of love, acceptance and “Yes, Queen!” reigned supreme in Rabbit Box’s April show Life in Drag. The glamorous and witty emcee Jacqueline Daniels (aka Rob Hagwood), who had a fantastic wardrobe change mid-show as a true diva should, gave the audience the treat of getting to know her as well as they got to know the storytellers. Long gone are the early days when she had to make her own costumes and squeeze her feet into shoes several sizes too small. She made sure that the audience left psyched about fun upcoming events in the cherished Boybutante AIDS Foundation’s 30th anniversary year of providing funds for agencies that support HIV/AIDs advocacy, education, outreach and/or direct client services in Northeast Georgia.

END_OF_DOCUMENT_TOKEN_TO_BE_REPLACED 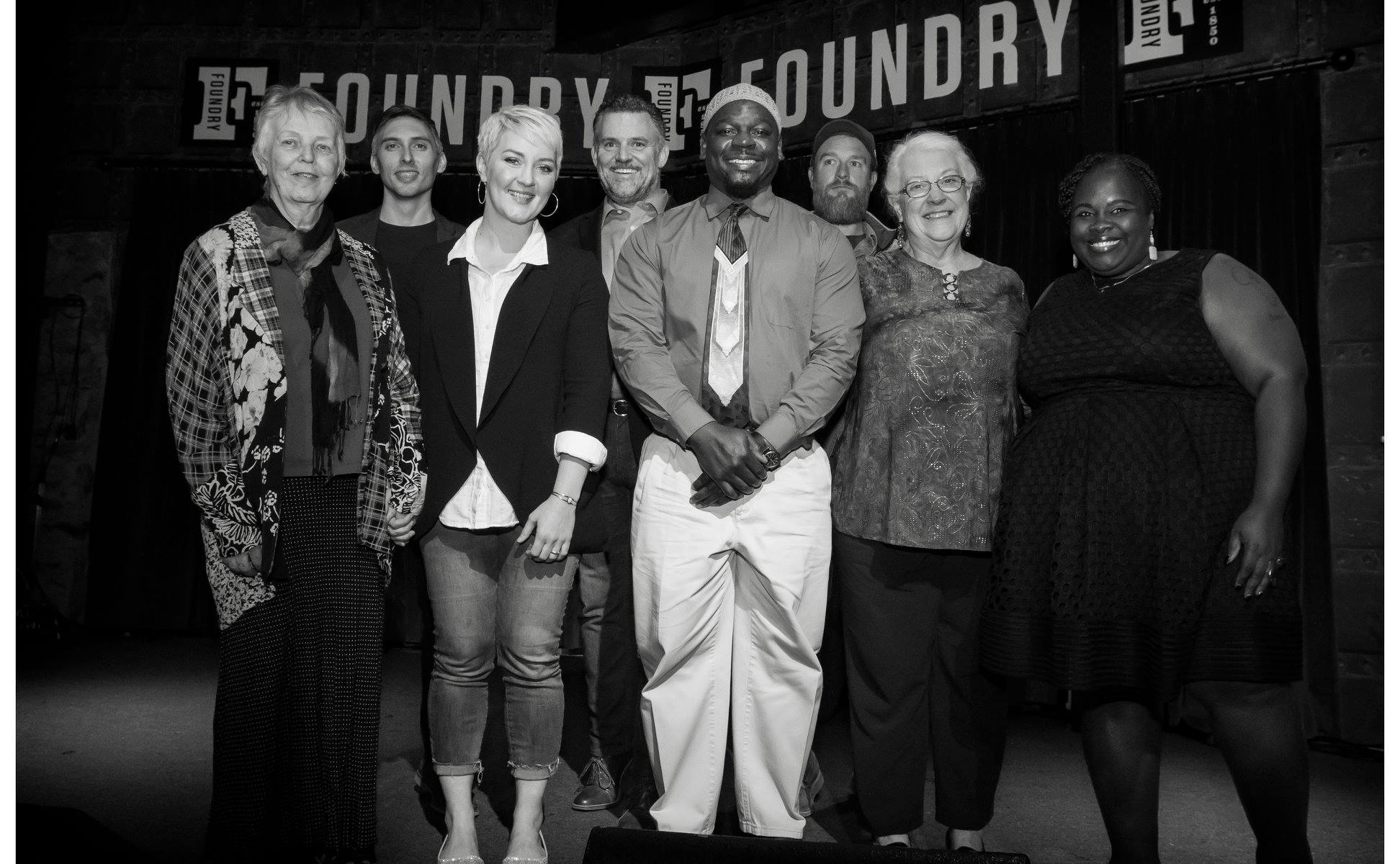 Money itself doesn’t physically talk but it sure made an impression on the Rabbit Box stage on Wednesday, March 13th.

Host Matt Goren — with his great radio voice honed on his show “Nothing Funny About Money” — made a point between storytellers to let the audience know that they do not have to struggle because of money. While the performer and comedic writer side of him kept the audience entertained, his financial education consultant side made sure they were informed about financial resources available to them.

END_OF_DOCUMENT_TOKEN_TO_BE_REPLACED 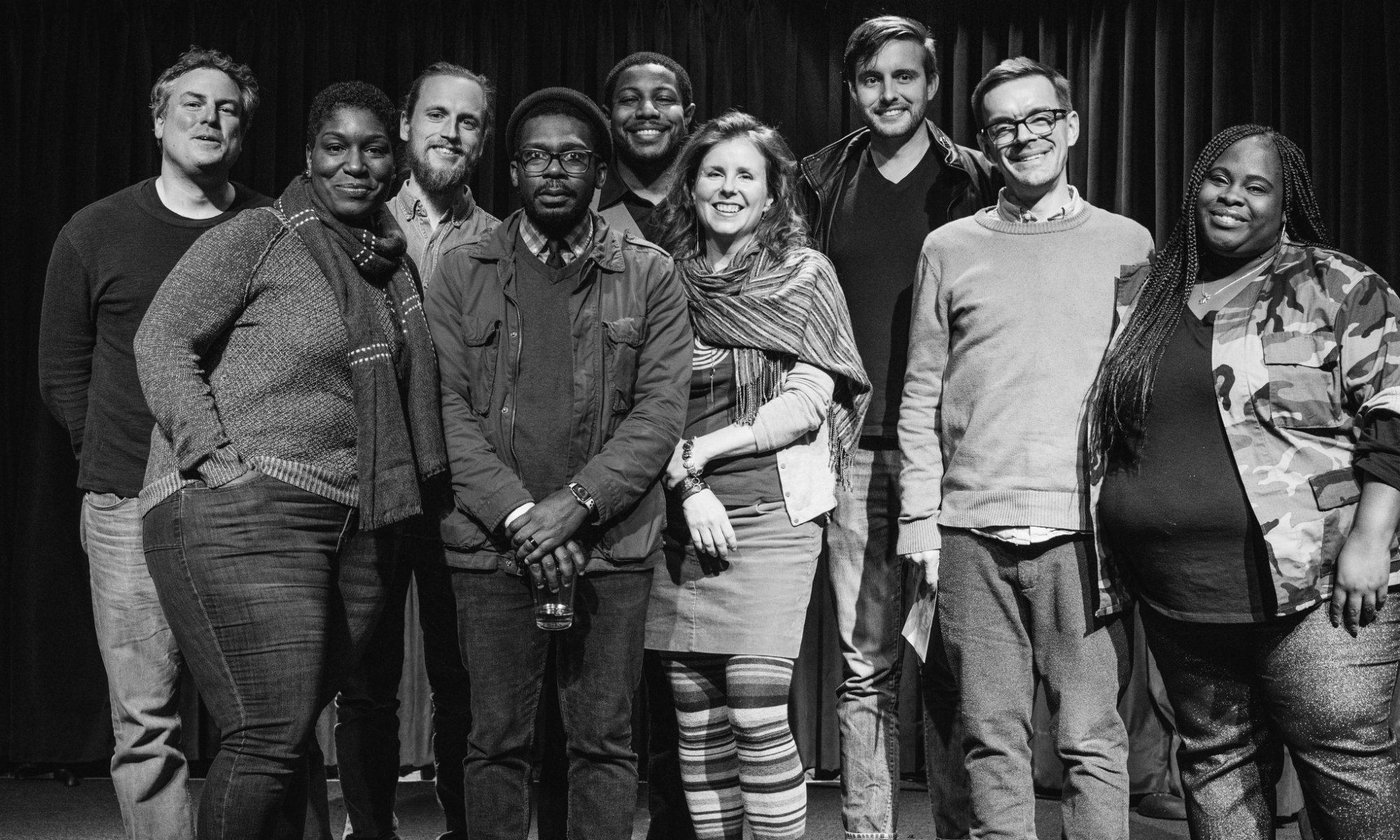 On Wednesday, February 13th, on the cusp of Valentine’s Day, the show theme Swipe Left pulled in stories all about love and dating, bringing a strong representation of male perspectives to the Rabbit Box stage.

Emcee, educator, poet, spoken-word artist, author, motivational speaker, therapist, and life coach extraordinaire Celeste Ngeve brought her fun personality and charisma to the stage, keeping the energy high in the room. She kept the crowd chuckling throughout the night between storytellers as she reacted to the vignettes in which audience members answered the question “What makes you want to swipe left?”

END_OF_DOCUMENT_TOKEN_TO_BE_REPLACED 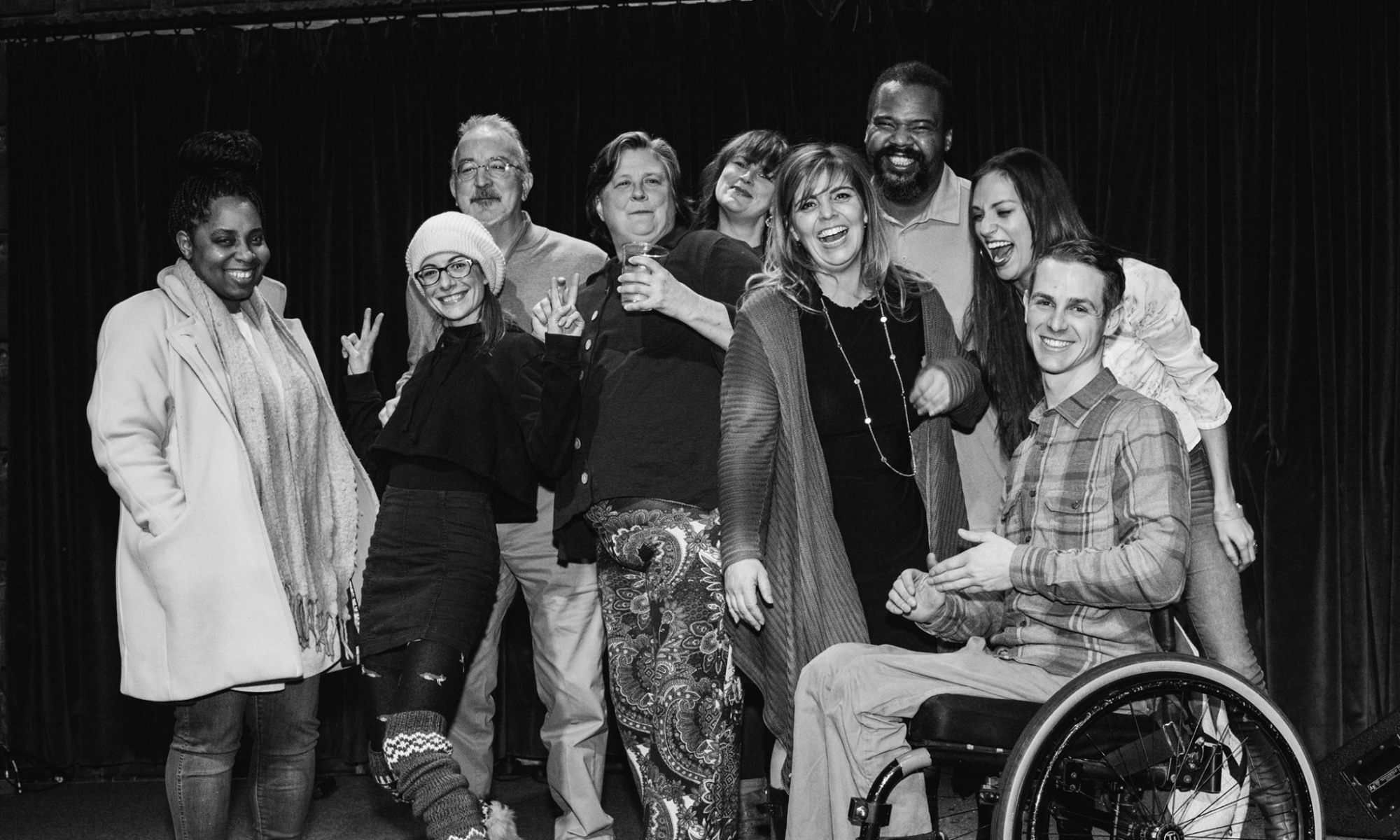 “Metamorphosis” is defined in Webster’s as a striking alteration in appearance, character or circumstances. This was a fitting theme for the first Rabbit Box of 2019 on Wednesday, January 9th. Ryder Crosby, a local business owner and memorable storyteller who shared his own story of transformation in the Rabbit Box “Skin Deep” show, was a fitting host.

END_OF_DOCUMENT_TOKEN_TO_BE_REPLACED 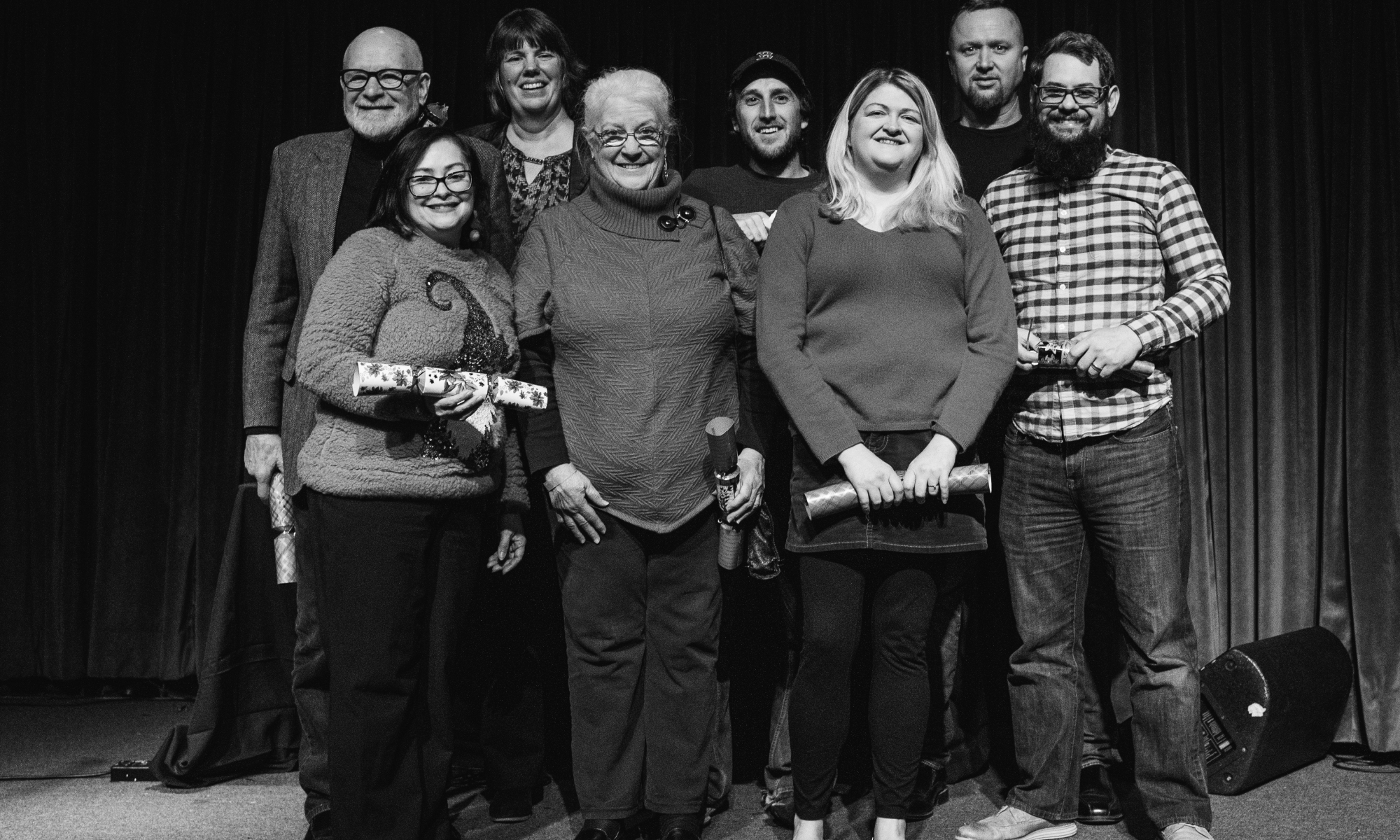 DJ’ed by Athens Latin and emceed by state representative Deborah Gonzalez, the special holiday edition of Rabbit Box was a riveting smorgasbord, as the theme suggests. To start the night off, host Deborah Gonzalez asked the audience to join her in singing the popular tune “Feliz Navidad.” Her inviting presence and relatable humor set a comfortable tone for community sharing.

END_OF_DOCUMENT_TOKEN_TO_BE_REPLACED

On the evening of October 16th, the Athens-Clarke County library welcomed the Rabbit Box community to its auditorium for an intimate storytelling event about books. And these weren’t just any books but those from PBS’ The Great American Read, a public television series and companion events at libraries that examined 100 novels Americans had chosen in a PBS survey as most worth reading.

The emcee for the night, Ashley Garrett, is a book enthusiast and blogger who holds degrees in Literature and English. She kept the energy high at the calm library with her quick-witted humor and infectious laughter. END_OF_DOCUMENT_TOKEN_TO_BE_REPLACED

A collaboration with Live Forward (formerly AIDS Athens), the Rabbit Box: Living Positive show drew a crowd of 200 to the Foundry on September 12th. The evening’s storytellers captivated the audience with their marvelous stage presence, spunk, and joie de vivre. Our emcee Riley Kirkpatrick provided heartfelt, thoughtful commentary for this remarkable night of storytelling that illuminated not only the stigma attached to the diagnosis but also its transformative nature.

Rick Schott had been close to someone who died within six weeks of learning he had HIV. Rick got tested often — usually a quick process, and he was on his way with a paper that verified he was free and clear of the virus.

Known as “Sister Paula” or “Grandma” by everyone in her community, Paula Venable gives hope and advice to those newly diagnosed.

Upon receiving her diagnosis in 2003, Phyllis Beard’s immediate response was “I’m gonna get busy living,” after which she fulfilled her lifelong dream.

Asynaka Willis lives his life with no shame and no stigma. He believes his diagnosis has made him a better person, except when it comes to dealing with 9th graders.

Our Cracker Jack Surprise storyteller, a Marine combat veteran, told of a Marine he knows with HIV and his sense that the two descriptors could not go together.

In a story that spans decades, Rob Hagwood shares his encounters with HIV: from witnessing the social and physical pain of his friends’ suffering to receiving his own diagnosis and thriving.

A recovering addict who was first diagnosed with HIV 32 years ago, Tammy Kinney knows what stigma looks like and encourages others to embrace their status and ask for help.

Olive Aneno grew up in war-torn Uganda. She details the pain and confusion of witnessing in glimpses her mother’s illness as she lay confined to a single room, with every precaution taken not to spread what seemed to be a highly contagious virus.

“It’s the Law”
by Tara Stuart

Joan Prittie — the quick-witted and charismatic Executive Director of Project Safe — graced the stage as mistress of ceremonies for Rabbit Box’s August show “It’s the Law.” The evening’s theme inspired first-hand accounts of defending, questioning, breaking, and taking steps toward changing laws in America and abroad.

Through these thought-provoking tales, the audience was transported into prisons, courtrooms, an Iranian paddy wagon, and to Capitol Hill and sold-out rock shows in Dublin, Ireland. The inspirational common thread pulling together all of the night’s stories was the persistent nature of the human spirit in the face of adversity

While campaigning on bicycle with his four-year-old son, Athens-Clarke County Commissioner Russell Edwards saved a potential voter’s life. Was that enough to earn a vote? Edwards also describes the impact John Lewis has made on his own life and tells the audience how he strives to be a pilot light for others.

Never one to conform to the gender expectations for girls, Shahrzad Roshan was arrested while in Iran by the Guardians of Islam for not dressing “appropriately.” An immigrant who came to the United States as a teenager, she describes being torn between two starkly different worlds — though both counties have one aggravating thing in common.

Serving twelve years as a public defender, Edward Brumby made it his job to see the humanity in everyone. He represented thousands of people over the course of his career, but his very first successful case involved an unwelcomed batch of instant grits.

Riley Kirkpatrick was the Crackerjack Surprise storyteller of the evening. His experiences as a trans man in America’s criminal justice system shed light on the legal implications and inequities facing trans people in our country.

Bertis Downs’ life has taken him from bellhop for The Rolling Stones to lawyer/manager of REM. He shares why he went to law school and tells a few of his adventures traveling the world with the band.

At eight years old, Terry Kaley was taught to drive by her beer-loving grandpa who advised her to look at distant goals instead of focusing on the immediate curves in the road. When an officer saw 11-year-old Terry at the wheel and gave her a firm warning that he better not catch her driving again, could Terry — smitten with the lure of the road — stop her law-breaking ways?

Although he didn’t pull the trigger in a robbery that turned deadly, Shane Sims received a devastating prison sentence when he was just 18 years old. After he was given a second chance at life upon his release, he questions whether or not our legal system serves the best interests of all citizens.

With more than 250 in attendance on a sweltering July night, renowned and beloved local artist David Hale shared both his humor and his vast knowledge of tattoos to kick off an epic storytelling event. 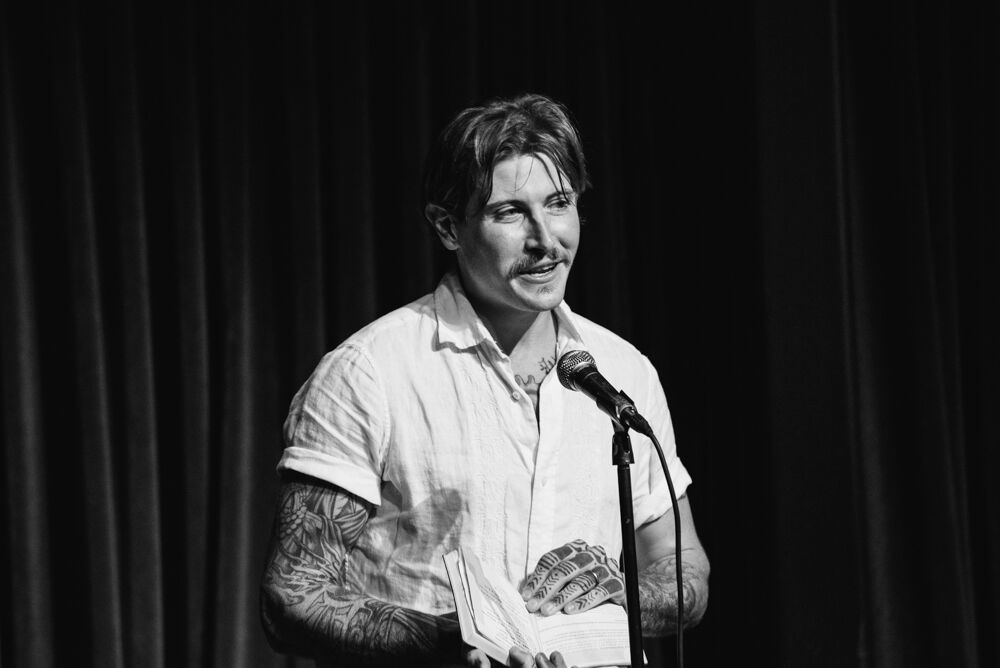 People told enthralling stories about their tattoos that encompassed a hilarious and drug-induced decision, emotional tributes to lost loved ones, lasting souvenirs of the indomitable human spirit, and tattoos that served as testimonials for keeping an optimistic perspective on life despite life-altering and wrenching circumstances.

Tara Stuart’s tattoo on her bicep captures an optimistic outlook on life despite personal heartache and chaotic events in the world that are often heartbreaking, too.

Melinda Cochran Davis shared how her tattoo, which served as a lasting keepsake of her indomitable spirit, depicted a towering love that had always sustained her in hard times.

Chris Richards’ bold tattoos, a sign of his healing from old emotional wounds, reveal his deep appreciation of Maori and other indigenous cultures.

Emily Nicholos shared with the audience the heart-rending story behind the loving tribute depicted on her wrist.

Our Crackerjack Surprise of the night, Madeline Bates, shared how her tattoo was a permanent expression of her rebirth and renewal after a violent event.

Hunt Brumby told a hilarious story about his face tattoos that involved a drug-induced trip with “friendly” gang members.

Ryder Crosby’s tale of his tattoo captivated the audience with his testimonial to his bravery in the face of life-altering circumstances.

Sharon Mitchell told her story of how a poem kept her from despair in hard times and became — when the title was inked as a tattoo — a literary reminder forever of her own unconquerable strength in the face of adversity.